The Sandals of Ancient Egypt 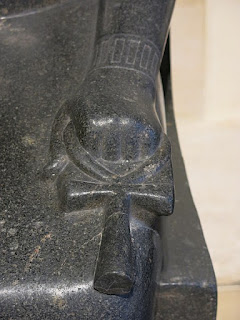 (Ankh in the hand of goddess Image via Tangopaso Wikimedia Commons)


The first evidence of people settling along the Nile Delta dates to 5000 BCE and societies like the Amratian Society of the Upper Egypt forming in 4000 BCE. It was the Menes who eventually joined Upper and Lower Egypt into one kingdom in 3110 BCE. As reported in Ledger (1985) shoes made from fine leather were worn by the high born in 4000 BCE. History of ancient Egypt is broken into three Kingdoms i.e. The Old, The Middle, and the New Kingdom. The time period covers 3 millennium (2920 - 30 BCE) and during this time there were 30 Dynasties. The fortunes of Egypt rose and fell but as trade routes increased more influence from other civilisations became apparent in both costume and custom. The vast majority of Egyptians went barefoot most of the time, but those of higher stations wore various styles of sandals. 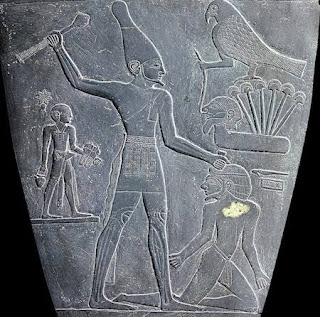 
In the Old Kingdom (2686 BCE – 2181 BCE), kings of Egypt (not called Pharaohs until the New Kingdom) became living gods and ruled absolutely. The first King of Egypt was King Narmer who was depicted walking barefoot with his slave bearing sandals behind him (Turner Wilcox 1948, p2). This would suggest footwear was kept for special occasions and the custom was to have sandals carried to the point of destination, before being worn for the occasion. Bearers of sandals often received promotion as recorded by Weni the Elder in the 6th century (2323 -2152 BCE). By now Egypt was a major trading nation and enjoyed fabulous wealth. During the 7th and 8th Dynasty (2150 – 2135 BCE) famine prevailed with, civil disorder, and a high death rates until the political structure of the Old Kingdom finally collapsed. The 9th and 10th Dynasty (2135 -1986 BCE) saw Egypt split into the north, ruled from Herakleopolis, and the south, ruled from Thebes. 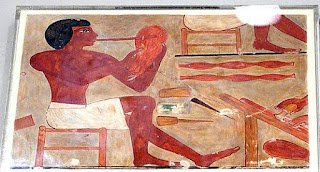 
During this time foreign trade again brought great riches with the building of many magnificent buildings and crafts like jewelry, prospered. Sandals dating to 2000 BCE were made from leather sandals and held next to the foot by plaited or woven thongs between the great and second toes, then wrapped around the ankles (Turner Wilcox 1948 p2.) The oldest images of shoemakers were found in frescoes in Thebes and were dated to 19th century BCE (Turner Wilcox 1948 p3). Shoemakers are depicted using implements similar to modern shoemaking tools. 
Originally sandals were made from a footprint in wet sand. Braided papyrus was then moulded into soles and the sandals were attached by palm fibre thongs to keep them on the foot. The Egyptian sandal was held next to the foot by three ties or thongs. The main thong passed between the big and second toe and joined the other straps on the instep to form a stirrup and tied behind the heel. Alternatively, a thong between toe two and three with the others on the medial and lateral aspect of the midfoot was used. The sole was typically flat. 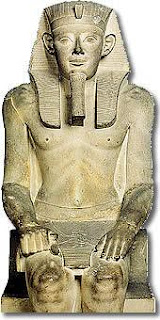 ( Amenemhet I Image via Quora)


Early Middle Kingdom (2055 BCE – 1650 BCE) shoes were little more than sandals with straps between the toes and joined to the sides at the heel with the upper leather just covering the foot without being fastened to the foot itself. The soles were plaided using strips of wood, rush , or flax. Alternatively they were made from untanned hide. An Asian influence become more apparent when King Amenemhet I (1991–1962 BC) started trade routes. The introduction of uppers would appear to add to the aesthetic of shoes and seem to be worn tight if illustrations dating between 200 BCE and 200AD depict corn cutters operating on feet incapacitated by tight uppers. 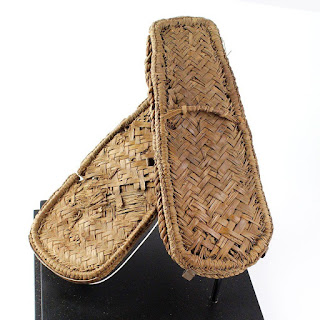 
Rush sandals were soled with leather. During the Middle Kingdom more robust footwear saw increasing use of sandals by soldiers and travellers (Lichtheim Vol II 1975). Sandals were adapted to work situations and butchers wore sandals made with a slice of cork sandwiched between two layers of leather on the sole and held together with small wooden pegs. The added height, sometimes 12 “ from the floor allowed butcher to cope with slaughtering animals. Sex workers from the Lower Egypt had a ‘follow me’ message on the sole of their sandals which left a tell all imprint in the sand. Cheaper sandals meant all but the very poor wore them. 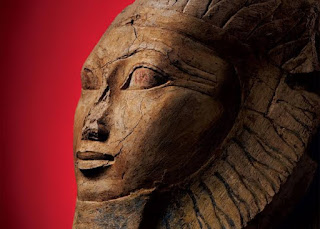 
King Thutmose I and his Queen Hat-Shep-Sut turned Egypt into a super power. The much loved Queen Hat-Shep-Sut (1479–1458 BCE ) wore bejewelled sandals. Her influence saw a rise in the popularity of sandal wearing and she actively fostered the sandal trade. Sandals took on the trappings of prosperity and authority. 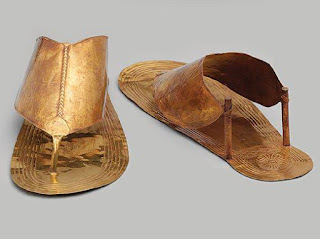 
High quality footwear was made from ‘moroccan’ style leather with lamb and goat skins dyed scarlet, green and purple (Turner Wilcox 1948 p2). Priests wore papyrus or palm leaf sandals made so that they could be slipped on from the front or rear. Egyptian priests removed their shoes out of respect for their gods. It was also the custom to remove sandals in the presence of superior rank . Shoes were worn outside the house but never in the home and much later children wore red or green slippers. 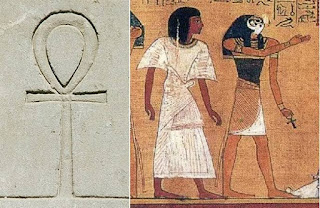 
The origin of the ancient symbol for life i.e. the Ankh (symbol for life) is unknown but Egyptologist, Sir Alan Gardiner thought insignia looked like a flattened thong. It might not be coincidence that the word ‘nkh” was used to describe the section of the sandal where a toe thong was attached. A common cure for headaches in ancient Egypt was to inhale the smoke from burning sandals. 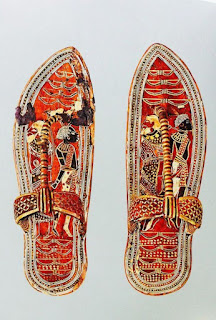 
In the 18th Dynasty Thutmose III (1479–1425 BCE) ruled Egypt for almost fifty-four years During this time he undertook many military campaigns. The Pharaoh spoke of the countries he conquered, as the lands under his sandal. A wall painting in the city of Thebes shows craftsmen fashioning sandals during the time of Thutmose III). It was during this time the Jews remained captive in Egypt and many were taught the craft of sandal making. Jewish sandals were made from rush, linen, leather, or wood and were tied to the feet with thongs. Soldiers wore heavier leather shoes and the custom was to stand on caricatures of the enemy. “You have trodden the impure Gentile under your powerful feet” (Turner Wilcox,1948 p 4). Enemies of Egypt were depicted differently: Hebrews had beards and long hair. Libyans were black figures and Syrians had white cloaks (reported in The Chiropodist, 1927, The Leeds Convention, 1926), and Hittites are depicted unshod. All the more unusual since the Hittites came from the Anatolian highlands and wore shoes with turned up toes. 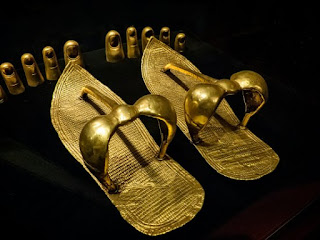 
In the outer chambers of the tomb of King Tut-Ankh-amen (1336 – 1327 BCE) there are two statues of the king wearing shoes with a golden ring. In the tomb of the boy Pharaoh there was is a shield decorated with figures wearing Assyrian sandals. The Mummy had pointed sandals of embossed gold with the toes curled gently upwards in the Hittite style. In Egypt golden thong sandals were used as funeral sandals (Bigelow, 1970 p32) and the belief was these provided comfort in after-death journeys. Egyptian mummies were sometimes laid to rest wearing burial sandals made from linen and decorated with jewellery (Putnam, 1996 ). 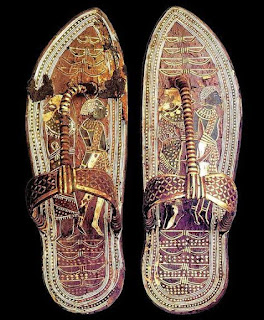 
In Tut-Ankh-amen’s tomb was a magnificent box containing 93 pieces of sandals and slippers. Some were made from gold with beautiful coloured glass marquetry. One had a papyrus sole and leather ankles trap edged with a gold ribbon motif on wide straps. The motif represented the Nile scene of lotus flowers and ducks in delicate circles of gold (Turner Wilcox 1948 p4). The thongs were composed of plaques topped with enamelled gold lotus blossoms. The flexible sole was about ¼” thick. A pair of bark sandals was also found in the tomb with the representation of the Kings enemies etched on the inside of the sole. 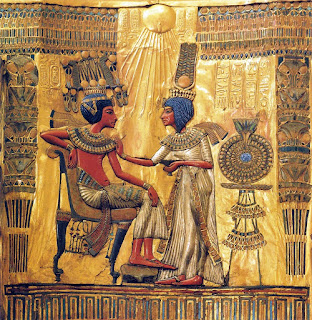 
Painted on the back of the king’s thrown were representation of himself and his Queen, Ankhesenamon . She was wearing simple sandals which followed her foot outline and attached to the foot with a single thong. The actual sandals are an exhibit in the British Museum. 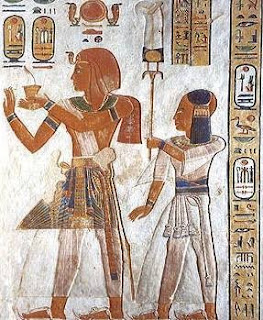 (Tomb QV44 Ramses III and his son Image via Khaemwaset )


Ramesses III ( 1186–1155 BCE), was one of the greatest Egyptian kings and wore elaborately decorated sandals. During the 25th Dynasty (712-657 BCE) the Greeks helped re-establish order in Egypt and there was a renaissance in the arts with a return to the Old Kingdom style. The Persians invaded and ruled Egypt (525-404 BCE). Later Alexander the Great invaded in 332 BCE. The sum total of which was a rich cross fertilsation in clothing and custom. Funeral sandals were found in a mummy case of Harsiotef , Kushite King of Meroe (about 404 - 369 BCE). These were lined with cloth upon which was painted a figure. Inscribed in hieroglyphics is “ Ye have trodden the impure peoples under your powerful foot.” This is now housed in the British Museum.


After Cleopatra and Antony committed suicide in 30 B CE, Egypt was ruled by the Romans. By this time shoe styles had extended to sock like boots made in very fine leathers (Turner Wilcox 1948 p5). These were usually highly decorated and were fashion with a stall to accommodate the leather toe seperator (thong) in sandals (Turner Wilcox, 1948 p 5).

A brief history of sandals

(Neolythic sandals Image via pinterest) The origins of sandals are pre-history and extends long before today’s plastic flip ... 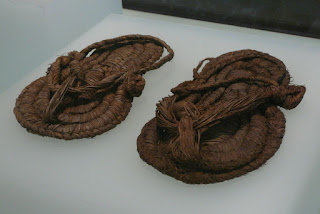 The files on this site are NOT for commercial use. You are invited to download the music and, if you like it, you are strongly encouraged to buy the CD. That way you support the artists who produce it. In any case you should see these selections as for evaluation purpose only and you're asked to delete the music 24 hours after storing it in your computer or external device. Should anybody holding a copyright claim to any of these materials object to their presence here, please post a comment, and I will promptly remove the download link.

The use of this material is free provided copyright (Cameron Kippen 2021) is acknowledged and reference or link is made to the History of Sandals blogspot. This material may not be sold, or published in any form without prior permission from the author. All written content remains the property of Cameron Kippen and no unauthorised use of the material is permitted.

If you wish to reference written content from the Foot talk Blog use the following: Kippen C. 2021 History of Sandals blogspot Retrieved from http://historyofsandals.blogspot.com/

Disclaimer: Reliance on information, material, advice, or other linked or recommended resources, received from Cameron Kippen, shall be at your sole risk, and Cameron Kippen assumes no responsibility for any errors, omissions, or damages arising. Users of this website are encouraged to confirm information received with other sources, and to seek local qualified advice if embarking on any actions that could carry personal or organisational liabilities. Please retain this notice on all copies. © cameron kippen 2021.